Why I Chose Century 21 Scheetz and Why YOU Should Too!

When I became a Realtor, I had a decision to make – what Indy area broker should I work with?

There are many choices in the Indy area – F.C. Tucker, Prudential, Remax, Keller-Williams, etc.. After extensive research, I decided to hang my license at the Century 21 Scheetz – Carmel office and 3+ years later have come to realize it was one of the best business decisions I’ve ever made. As a realtor in the Hamilton County area, I feel privileged to be backed by an organization as well known as Century 21 Scheetz. The exceptional training, continuing education, cutting edge technology & network of other real estate agents are what keep me ranked in top 5 in the office and keep me “at the top of my game” when it comes to helping you buy and sell homes in the Hamilton County area – which results in more money in YOUR pocket!

Here are a few “stats” that helped to make MY decision to join C21 Scheetz and why your home should have a Century 21 Scheetz sign in the yard!

According to a recent national survey, Century 21 is the most recognized name in real estate – there are 7,700 independently owned and operated franchised broker offices in more than 66 countries and territories.

That’s fantastic, but what does that mean for local Indianapolis area buyers & sellers?

Working for Century 21 Scheetz has provided me the opportunity to work with so many top notch people & enhance my knowledge of real estate. I am backed by one of the best real estate brokers in the world – right here in Indianapolis!

I would welcome the opportunity to assist you with buying or selling! 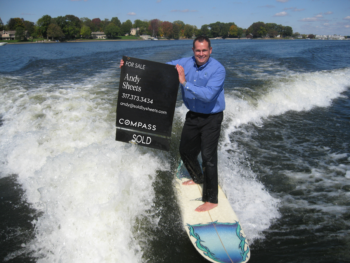